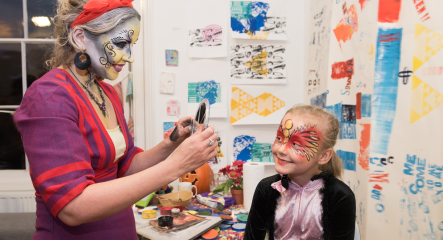 As we gear up for the next lot of Fantastic for Families awards, we’re shining the spotlight on last year’s well deserved winners.

We decided to open the gallery from 5-9pm for an after-hours family Halloween event to celebrate the national Museums At Night. Our primary aim was to appeal to young families who might feel intimidated entering a gallery space and particularly to encourage those who had never visited a gallery before. We had noticed that there seemed to be no Halloween events for families in Honiton so Saturday 29 October seemed a good date to hold the event.

The main departure for us was opening late especially for a family event. (We normally close at 5pm). We designed a striking poster and fliers to promote the event locally. Emails and newsletters highlighting the event were sent to our core database, which already included families who attended our workshops. To reach new visitors, we targeted local newspapers and magazines, local listings/what’s on websites, social media channels particularly Facebook groups, local schools newsletters and advertised in the Devon Primary Times magazine.

We wanted a range of food options to appeal to families so contacted local food vendors selling wood-fired pizzas and Caribbean food. 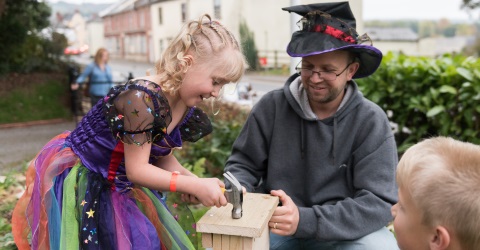 The garden was illuminated with pumpkins and red hanging paper lanterns, there was a pop-up cocktail bar in a fairy-lit gazebo and local food stalls. Children enjoyed a treasure hunt and participated in a workshop making their own bat boxes to take home. Inside the gallery space was a DJ playing family-friendly tracks and free scary-face-painting alongside a community exhibition featuring Eduardo Paolozzi-inspired artworks created in family and schools workshops. Upstairs in the Learning Room families made their own shadow puppets with artist Willem Montagne and then performed with them in a shadow play. In the Project Space, families encountered exotic animals such as snakes, lizards, skunks and spiders from Exeter Exotics including a six foot python and had the chance to meet and, if they were brave, stroke them! Making full use of our new community garden using straw bales for seats meant families could relax with young children and have space to socialise.

Over 600 participants of all ages attended the event and we won Best Family Event for our contribution to the 2016 Get Creative Family Arts Festival.

A large proportion of visitors on the night had never visited a gallery and were really surprised to find what a fun space it was. They also commented that it was a good alternative for families on Halloween to trick-or-treating.

We decided to make the event free to appeal to cash-strapped young families but took donations at each activity and at the gate. One of the visitors commented, “We went along to the free to enter night with no expectations but were greatly surprised to find the whole event well organised and very well planned and executed.”

We were overwhelmed by the popularity of the event and in fact it was the busiest event in our 16 year history! We aimed to challenge expectations of an art gallery and stretch our offer. The gallery became a playful, family space with a different atmosphere from the daytime gallery experience.

Applications for the Fantastic for Families Awards are open until 10th January 2018. Find out more and apply.